This year AFC Telford United Youth Development will be running squads from Under 8 through to U16. Some of the squads will be representing Telford and Wrekin Schools Football Association as well as AFC Telford Utd. The overall aim of AFC Telford United Youth Development is to develop and improve footballers technically, physically, socially and psychologically, in a safe and controlled environment to enable them to cope with the challenges of the modern game.

Telford Sink to biggest defeat of the season

Telford entertained Wyre Forest ladies at Lightmoor on Sunday for the first group game of the Tri Counties tournament.

Unfotunatley, apart from 15 minutes at the start of each half, Telford were not at the races and only just kept their opponents into single figures.

Telford did start brightly with some excellent passing and moving but once Wyre Foresty settled into the game and countered the fluid passing, Telford didn’t have an answer and were pinned in their own half for long periods of time in each half.

Telford travel to Droitwich on Sunday hoping to put the last 3 games behind them and to start afresh. 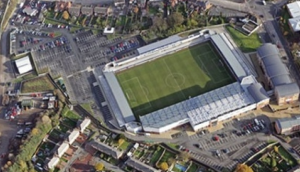 The pricing policy was referred to the FA Cup Committee by Nuneaton Town after both clubs failed to reach an agreement. AFC Telford United have managed to secure reduced admission for spectators.

AFC Telford United slipped to a narrow defeat against much-fancied Grimsby Town today, although the Bucks were probably worthy of at least a point.

Steve Jones had deservedly levelled after Nathan Pond had given Grimsby the lead against the run of play, but Ian Miller restored the Mariners’ lead soon after and Telford were unable to find a second equaliser despite dominating possession in the second-half.

The first of 3 events hosted by the football club introduces

The annual Sportsman’s Dinner, in association with MFG Solicitors.

Open to all to attend this is a great nights entertainment

Tickets priced at £40 per person (including VAT)