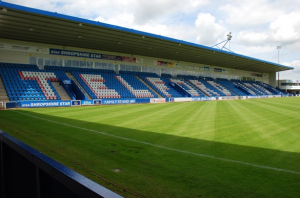 AFC Telford United’s New Bucks Head stadium is considered to be amongst the best non-league grounds in the country, and holds a football league ‘A’ grading.

Construction of the new stadium commenced in 2000, replacing the Bucks Head ground which had been home to Wellington Town and Telford United for over a century. Although the Bucks Head held a special place in the hearts of many supporters, it was in desperate need of renovation. The terraces were a mixture of concrete steps and cinder banking, one of the stands was built from wood and the toilet facilities left a lot to be desired

In the 1999/2000 season, demolition work began on the Railway End terraces, albeit slowly at first. The following season, the new stadium slowly began to take shape. Telford United played with only two terraces in operation, with a small temporary stand situated on what is now the Jack Bentley Terrace and portacabins in the car park were used for changing rooms.

The stadium was finally completed in 2003 and can hold 6300 supporters, with seating for 2200 and further covered accomodation for 2600.

The stadium development was complemented by the construction of the AFC Telford United learning centre, positioned behind the Jack Bentley terrace, which is where the club offices, bar, meeting and education rooms are housed.